Counting the blue chips on ZSE 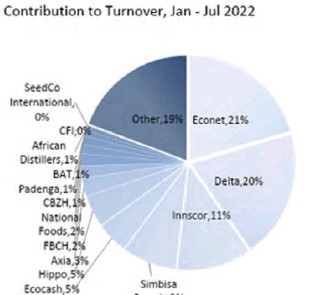 TIME and time again we often hear investment professionals throw the term “blue chip” when discussing stocks, but not much about this term is explained to novice investors. The term originated from the card game poker, which often has red, white and blue chips, with blue chips being the highest in value. The term’s earliest recorded use in stock markets was in 1923 after Oliver Gingold, an employee at Dow Jones, referred to certain stocks trading at high values of over US$200 per share as blue chips. The term has stuck ever since, but its characteristics in the context of stocks have evolved and there remains some level of subjectivity in identifying blue chips in the current environment. Blue chip stocks are very popular among institutional investors because of their liquidity and sound fundamentals, which underpin their resilience during economic shocks. Qualifying characteristics for the term have moved beyond just a US$200+ share price. New characteristics include: Large market capitalisation; High liquidity; Little or no debt; •Stable debt-to-equity ratio, high return on equity; and Stable dividends payouts. We use these characteristics to identify stocks that can be classified as blue chips on the Zimbabwe Stock Exchange, FINSEC, and Victoria Falls Stock Exchange. Given that the market capitalisation of a stock is a primary defining factor of a blue-chip stock, we begin the exercise with the top 15 stocks by market cap. Based on share prices as at July 29 2022, this gives an initial list with Econet, Delta, Innscor, Ecocash, Simbisa Brands, National Foods, Padenga, CBZH, BAT Zimbabwe, Hippo, Seed Co International, FBCH, Axia, African Distillers and CFI. Another defining characteristic of blue chips is the high liquidity. Liquidity refers to the efficiency or ease with which an investment can be bought or sold without affecting its market price. To quantify liquidity, we find the contribution of each of the abovementioned stocks to the daily traded value over a six-month period, and rank liquidity using each stock’s 6-month average contribution. Based on the graphic, stocks contributing less than 5% to the total value traded are disqualified, with Econet, Delta, Innscor, Simbisa Brands, Ecocash, and Hippo remaining. At this point, all six counters exhibit the primary requisite characteristics of a blue-chip stock. However, if one uses a strict definition of the term, then additional attributes need to be interrogated for each of these stocks. These additional characteristics focus on the fundamentals of the stocks in question. We begin with Delta, which emerges as a clear blue chip from the results of the analysis. The brewer is one of the well-established companies on the ZSE, having been incorporated in 1946. The stock’s listing remains unquestioned despite the bourse’s decline in active counters from 77 in 2012 to 51 in 2022. Its debt-to-equity ratio averaged 16% between 2010 and 2016 when the economy was stable and dollarised, with a variance of 0,5%. Over the same period, the return on shareholders’ equity was consistently positive and averaged 25% with a very small variance of 1%. Delta has also been a consistent dividendpaying business and only forfeited a dividend once in 2020 out of economic uncertainty driven by the Covid-19 pandemic. We opine that Delta is a true blue-chip stock regardless of the yardstick used. Innscor also meets the strict definition of a blue chip. The business is barely 40 years old, but it has become a market leader in Zimbabwe’s select consumer discretionary and non-discretionary markets. The business also owns leading miller National Foods and enjoys synergies from unbundled operations now listed as Simbisa Brands. Its leverage is also consistent and stable, as is its return on equity. We also note that the business’ commitment to returning value to shareholders remains unparalleled given that it last forfeited a dividend in 2009. Econet’s fundamentals are also commendable given that the business is at the centre of voice and data services in Zimbabwe during the fourth industrial revolution. Although the business is much younger than Delta, Econet has risen to become the largest service provider in the telecommunications, media and technology industry. The business also birthed Ecocash, which it subsequently unbundled in 2018. Just like Delta, Econet was consistently profitable during Zimbabwe steady-state period, but the abrupt currency change in 2019 resulted in losses that were driven by currency exchange losses. That said, the business’ Operating Profit Margin has averaged 22% between 2014 and 2019 with a variance of 0,4%. However, the company’s leverage has been muddled by foreign currency-denominated debentures and this has also affected dividend payouts to shareholders. We opine that this is temporary and after next year Econet will resume dividends at an average payout ratio of 17%, as was the case between 2014 and 2018. Ecocash and Simbisa Brands are yet to be proven as standalone businesses, and we think that it is still too soon to crown these businesses with blue-chip status. We also add that the persistent financial challenges being faced by Hippo’s parent company Tongaat Hulett since 2018 have added some uncertainty to Hippo’s ZSE listing. For example, Hippo’s listing was suspended in 2019 over delays in the publication of Tongaat’s financial results. Despite sound fundamentals in the business, a cascading effect from the parent company’s woes disqualifies Hippo as a blue-chip stock. —