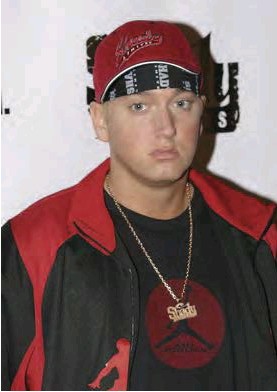 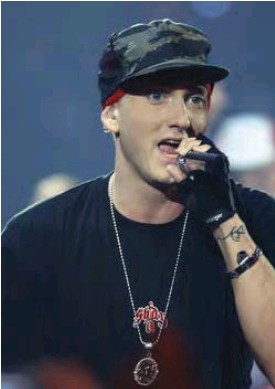   Is thIs the real slIm shady CONSPIRACY theory that Eminem is actually a clone of the original Marshall Mathers is doing the rounds online and fans are asking for the real Slim Shady to please stand up. The theory began swirling when fans noticed that the singer's voice changed and people naturally concluded that the rapper must have died. Then, to throw fuel on the fire, Spanish website La Guía Del Varón addressed the 'My Name Is' rapper as an 'android clone' and reported the theory as fact. Fans have continued to analyse the available information ever since and have noticed that the singer's jawline has also changed dramatically over the years. One fan wrote: "Yeah I believe he is a clone, it doesn't even look like him anymore and his eyes are dead." Digging deeper, fans noticed that the lyrics in Eminem songs began to change around 2006, with 'a great emphasis on the hip hop lifestyle' and his dress sense changed to a 'darker' style. Then, in 2013, footage of the rapper 'glitching' on a live TV show was shared online, and in 2016 fellow rapper B.o.B started posting theories about human clones. In 2019, Tom Macdonald released 'Cloned Rappers' which claims the 'Illuminati took bone samples to clone rappers' before putting the real deal in prison to 'silence their vision'. The theory might sound far-fetched, but some fans are buying into it as one wrote: "I believe that Eminem's is a clone he doesn't look the same after the so-called accident where he just disappeared for about a year he came back looking different." But not everyone is convinced, as another wrote: "The idea that he's a clone is one of the dumbest conspiracy theories ever. That song from Tom was one of the worst songs he's put out. As people age, they grow and change as a person." — co.uk. Mirror.