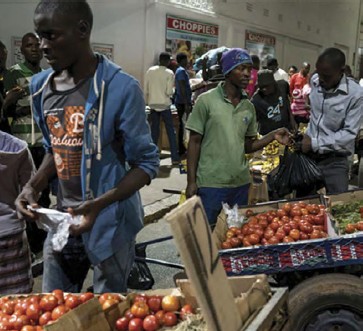 PLUMMETING disposable incomes have battered sales of residential properties in Zimbabwe, real estate firm Knight Frank Zimbabwe said this week. Hyperinflation has returned to haunt Zimbabwe 14 years after the country was forced to ditch its currency when the inflation rate hit 500 billion percent according to International Monetary Fund estimates. Like in 2008, Zimbabwe is experiencing foreign currency shortages, which have triggered turbulence worsened by currency fragilities that have led to low disposable incomes. In its Africa Report 2022/23, Knight Frank said depressed demand had been compounded by sellers’ push for trade in foreign currency. But the Zimbabwean market is dominated by local currency clients as the majority of Zimbabweans have no access to foreign currency. e mortgage market has been weak and most buyers have to find cash to acquire properties. Sellers of goods and services in a cross section of the economy have turned to United-States-dollar transactions to avoid loss of value. Knight Frank managing director Siza Masuku said, in contrast to troubles facing residential property dealers, the suburban office segment was booming. e country’s biggest firms have recently been trooping out of central business districts, which have been swamped by informal traders who operate from pavements and property entrances. He said some consumer-facing businesses have relocated, citing depressed trading after informal traders camped on shop fronts to sell cheaper goods. “Hyperinflation and foreign currency shortages are affecting economic stability, resulting in the erosion of real disposable incomes and hence negatively impacting confidence levels.” “e real estate market remains in limbo. However, the suburban office market remains buoyant due to ongoing relocation activity away from the CBD,” Masuku added. Zimbabwe’s property market has been hit from many fronts. Firms have been downsizing occupied space in buildings to manage surging costs. Since the Covid-19 explosion two years ago, many firms directed employees to work from home to avoid contagion, leading to a reduction of occupied space. e economic crisis is set to offset Zimbabwe’s target of delivering more houses to citizens under its Vision 2030 strategy, according to Knight Frank. According to the government the country is working on several strategies to reduce its two million national housing backlog. Experts say strategies towards the attainment of Vision 2030 revolve around providing human settlements which meet people’s aspirations, while addressing affordability and modernisation aspects. Under the National Development Strategy (NDS1) Zimbabwe is expected to deliver 220 000 housing units by 2025. is is expected to be achieved through collective efforts by stakeholders and all parties involved in human settlements delivery. e Knight Frank report said unlike in neighbouring Zambia where the property market had entered a post-pandemic recovery phase, domestic house hunters in Zimbabwe have been locked out of the market due to currency issues and high inflation. Annual inflation, which touched 50,1% in June last year, surged to 256% last month. However, it is not only Zimbabwe’s property market that has been affected. e report said Tanzania was also experiencing depressed performance in the residential property market. According to the report, residential lease rates across Tanzania have slipped by close to 50% in the last two years as an oversupply of rental properties, combined with weakened demand, largely due to the pandemic, has undermined the market. To the contrary, the residential market was firmly in recovery mode in Uganda, as evidenced by high demand and rental indicators, the report noted. Catalysts for demand in that country’s residential sector include the return of expatriates to the country after Covid-19 travel restrictions were lifted. Renewed demand from oil and gas sector professionals coming in following the signing of key oil agreements in April 2021 and the Final Investment Decision in February 2022 have also increased demand for housing. Botswana, South Africa and Mozambique were optimistic of their housing markets, said Knight Frank. e report noted that Algeria’s housing market had been depressed after being severely hit by Covid-19 with values on the decline. e pandemic, the devaluation of the Algerian Dinar and the general drop in purchasing power have added to the residential market’s malaise, it said.