Nations Conference on (Unctad). She became the first black woman to list and head a publicly-traded company (NicozDiamond), a position she held until her deparTrade and Development 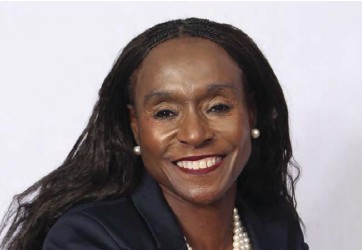 GRACE Muradzikwa is a decorated insurance executive with over 37 years’ experience in the sector. She is the Commissioner of Insurance, Pension and Provident Funds in Zimbabwe. Muradzikwa was a member of the team that founded the Zimbabwe Reinsurance Corporation in 1984, with the support of the United ture in February 2019 to take up her appointment as Commissioner of the Insurance and Pensions Commission (Ipec) in June 2019. Muradzikwa is a Fellow of the Institute of South Africa and of the Toronto Centre for Global leadership in Financial Supervision. rough her dedication and hard work, she has won several local and continental awards. She was recently recognised as one of the Top 50 Women in Insurance in Africa at the African Insurance Organisation (AIO) Conference 2022, for her positive impact and distinguished leadership qualities in advancement of women in the insurance industry. Muradzikwa has served on various boards of local, regional and international institutions, among them; the Zimbabwe Revenue Authority, the Federation for Afro Asian Insurers and Reinsurers and the Association for Insurers and Reinsurers in Developing Countries. She is currently the patron of Women in Insurance Zimbabwe and former president of Professional Women in Business in Zimbabwe. Muradzikwa holds a Bachelors’ Degree in Administration, Masters’ Degree in Business Administration, and Honorary PhD in Leadership.