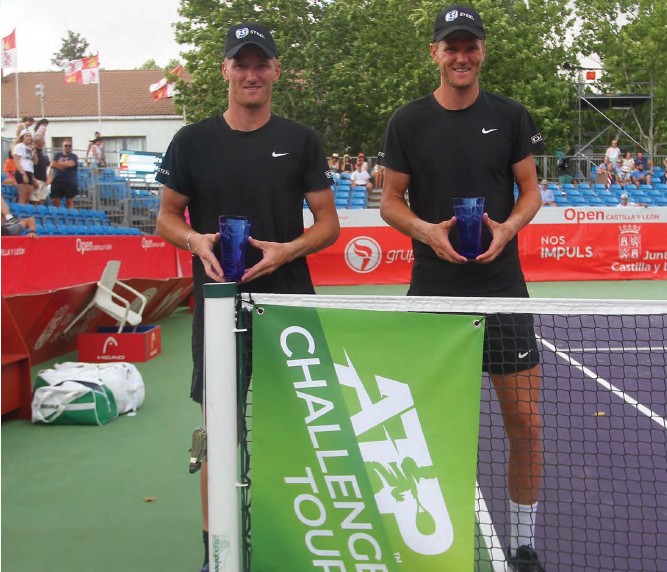 Courtney Lock basks in maiden ATP Challenger tour final. . . Page 24 Curtney Lock (left) and his brother Benjamin show off their runner up medals at the Open Castilla y León Challenger tournament in Spain on Saturday Top Zimbabwe tennis player Courtney Lock has expressed delight after joining forces with his older brother Benjamin to reach their maiden ATP Challenger Tour doubles final at the €64,000 Open Castilla y León in Spain over the weekend. The Zimbabwean duo lost 7 – 6 6 – 3 to Spaniards Inaki Montes-DeLa Torre and Nicolas Alvarez in the deciding rubber on Saturday night. It was the first time that the pair, who have won 16 double titles in the less fashionable ITF Circuit, reached the final on the ATP Challenger Tour. The 25-year-old tennis player, who spent about a year and half on the side-lines after undergoing three hip surgeries in 2020 while several doctors told him his career could be over, could not hide his joy at last weekend’s achievement.* “As little kids these are the stages that we grew up dreaming of playing in and being in watching on TV so it was a very special moment,” Courtney Lock told Weekly Digest. “It was a very special moment for us. It’s our first challenger final and we have been playing well for some time but it was really nice to see it connect this week. “The conditions at Villa de El Espinar, the venue of the tournament, were very similar to Zimbabwe as well as the altitude and so we enjoyed playing in those conditions. “We have gone up high on the professional tennis rankings and Benjy has a career high singles ranking of 350 now while I have a career high doubles ranking of 258 so it was one of the best weeks of our lives. “And we are going to build confidence from that into the Davis Cup in 10 days’ time so we are very happy with it. We are taking confidence from it and we know we are going to play many more ATP Challenger Tour finals to come,” he said. Unlike Courtney, Benjamin Lock has already won three double titles on the Tour in the past two years. His first came at Launceston Challenger 80 in Tasmania, Australia when he teamed up with American Evan King to beat home favourites Jacob Grills and Calum Puttergill 3 – 6 6 – 2 10 – 6 in February 2020. The 29-year-old star also joined forces with Yu Hsiou Hsu from Chinese Taipei as they won back to back NurSultan Challenger double titles in Kazakhstan last year. So far this year, the two Zimbabwean brothers have won three titles on the ITF Circuit after triumphs in Medellin Colombia in March before beating a pair of brothers, Australians Jason and Adam Taylor at the ITF Italy F2 tournament mid-May. And at the end of May Courtney and his elder brother Benjamin Lock won a third title inside two months when they scooped ITF M15 tournament in Algeria’s port city Oran.